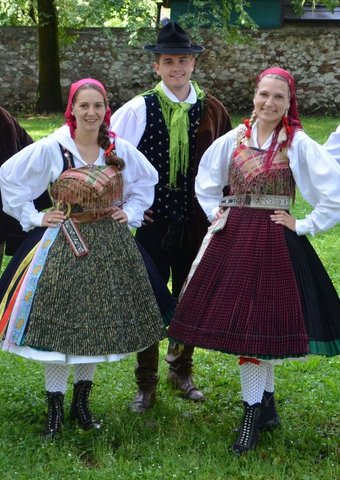 The Untergailtaler Kirchtagstracht is a very special kind of traditional costume. It has its origin in the lower valley of the river Gail and it was pieced together within the last few decades, which means that farmers, merchants and travelers brought their wives always a little something from their journeys, like leather ware from Slovenia or colorful fabrics from Venice.

The girl’s dress consists of a variety of many different pieces. Beginning with the white socks, the girls also wear black leatherboots and knee-long cotton shorts and a tight white linen underskirt. Above two big unterskirts are worn. They have about 12 meters of linen. Those skirts are starched with rice starch and later on ironed. The white linen blouse has a so called V-collar, which gets starched with sugar water and layed into waves. The core of the costume forms the overdress called Ras. It is very colorful and includes colorful linen, cotton and velvet fabrics. To the Ras also belong two aprons, where one is black and one is with color. To round up the costume, the girls wear a with pinfeathers embroidered belt around the waist as well as a colorful cloth on head and around the breast.

The men’s costume is held very simple and in dark colors. It was usually worn by farmers or wagoner. The basis is a white linen shirt with baggy sleeves and red embroidery pattern on collar and shirt cuff. Over the shirt they are wearing a colorful vest out of velvet and a colorful cloth around the neck. The knee-high boots are held in brown colors. To round up the costume, for special occations the men also wear a black hat and a brown velvet jacket as well as a jelly bag cap, which peaks out of their pockets.

HOW TO PUT ON THE GAILTALER TRACHT?

THAT'S HOW IT IS MADE

Frequently we have been asked pretty often how we put on the Gailtaler Tracht and how the different pieces of the costume itself look like. So, we decided to create an step by step photo story to give a little view on how to put on the costume.

The dancers start with the socks, red ribbons around the knees, the knee-long pants and the tight underskirt followed by the boots. The boots are put on that early, because in step 2 it is not possible anymore to reach the feet.

The big underskirts usually always have either suspenders or a top attached due to their heavy weight and that they don’t slight down during performances.

Afterwards the blouse is put on and closed with buttons or safety pins:

The Ras is an open dress and put on like a coat. The V-Collar has to be atop of the dress and the Ras itself is tightened with strings in the front.

The black apron gets tightened around the waist:

Like the black apron, also the colorful one gets tightened around the waist and fixated on the Ras with safety pins or press buttons.

On the upper part of the cloth, a brooch links the blouse and the cloth.

Now the dancer puts the belt around her waist. The lower part of the cloth on the breast has to peak underneath the belt, whereas the knot on the back has to be atop of the belt.

A red bow is tied on the knot.

The dancer either has to have her hair in a ponytail and completely under the headcloth or braided into one or two braids. In the second case, the girls have to tie a red bow on the braids.

In the last step, a cloth, also folded into a triangle is tied around the head. 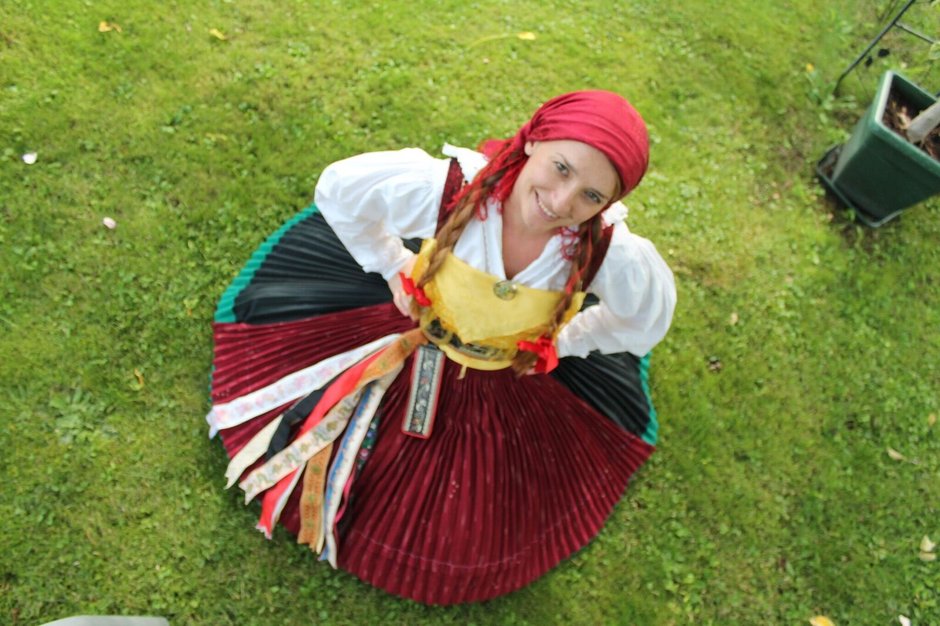